You are here: Home / Family / A Saturday in Memphis…with Elvis

It was February 25, 1961 – a bitter cold Saturday in Memphis – and one I’ll never forget. It was the day of the “Special Matinee Memphis Charity Show, starring Elvis Presley”!

I had just turned 15 in December and, like every other teenage girl in America, I loved Elvis and his music! My 15 year old best friend Kathy, my 12 year old niece Sharon and I were going to the concert, and I’m sure we’d talked about nothing else for days. Thankfully, Kathy and Sharon still had their ticket stubs, so we’re sure of the exact dates. Between the three of us, I believe the story is quite accurate.

Sharon remembers that Daddy drove us downtown that morning, most likely on his way to work, so it would have been early – much too early for the concert. Kathy remembers that we walked to Goldsmiths (a large department store) to purchase our $3.00 tickets. I remember that it was COLD…with the winds coming in across the Mississippi River, carrying with them the type of damp cold that truly goes right through you. What we needed at that point in time were the L.L. Bean down jackets you could get today, but certainly none of us had them.

The tickets were printed: “Special Matinee Memphis Charity Show Starring Elvis Presley, Auditorium Amphi Theater, Admission $3.00. Doors Open 1:30 p.m. No Refund. No Exchange. (as Sharon says, “like we would have wanted to!”)

I have a very vivid picture in my mind…yes, even after all these years…of the three of us girls standing in line early at the Ellis Auditorium. The doors didn’t open until 1:30 p.m., but we were in line much sooner than that…standing there waiting and freezing to death in that bitter cold. Ellis Auditorium was on Front Street – as in river front – so you can imagine how cold it was. So, there we were…standing there waiting to see Elvis with our little sack lunches in our hands. For some reason, I love that particular part of the story!

As I recall, somewhere around 11:30 a.m., the janitor or some other angel who worked at the auditorium had mercy – or pity – on all of us (and by that time, there was a pretty good-sized crowd) standing in line. He opened the doors for us, and we RAN! The three of us ran like the wind, and amazingly managed to get seats on the THIRD row! Yep! The third row. THAT I can remember. Seems in my mind, it took a good while to warm up…but then we enjoyed our sack lunches.

A young, handsome Elvis Presley sang his heart out and the show was incredible. Yes, just in case you were wondering, Kathy, Sharon and I did our share of swooning and screaming – just like the hundreds of other teenage girls there. Since we were on the third row, it stands to reason that somewhere in the dusty archives of the former Memphis Press Scimitar, the Memphis Commercial Appeal or maybe even the A.P., there is a photo of three young teenage girls who had braved the bitter cold that February day in 1961. 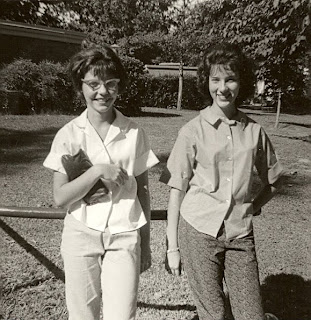 (These two photos were made in August 1962 at the Memphis Zoo…Sharon and Kathy…and Dianne below. For some reason, I don’t think we had our cameras with us at the Elvis concert!) 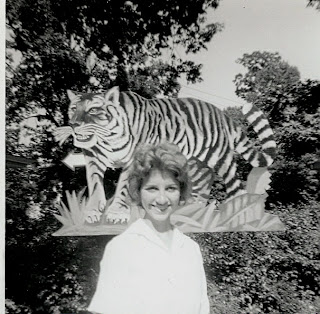