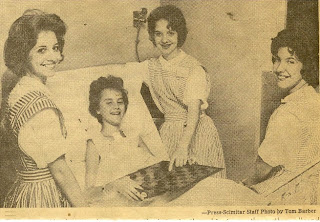 I spent the summer of 1962 working as a volunteer “Candy Striper” at what was then John Gaston Hospital, now known as the Regional Medical Center of Memphis. I was sixteen years old and had just completed my junior year in high school.

There were only two choices for traveling to the hospital each morning. I could take the city bus, which would have involved transferring at least twice, or my Dad could drop me off very early at the hospital on his way to work. Even though it meant getting up at the crack of dawn and arriving an hour earlier than the other Candy Stripers each day, I chose riding with Daddy.

I was assigned to work in pediatrics helping the nurses feed, bathe and generally help the young patients. Part of each day was spent in the “play room” where the children who were ambulatory would gather. There we would read to and play games with the children as their conditions permitted.

Velveeda arrived a few weeks after the summer began. A tiny little thing, she was about four years old. She had skin the color of ebony, huge dark brown – almost black – eyes and long black eyelashes. Her story was heartbreaking. She lived in one of the poorest areas of Memphis, born to a very young mother who had no idea how to care for her. Velveeda had somehow swallowed lye…literally destroying her esophagus and a large portion of her stomach.

Velveeda and I quickly formed an attachment to one another. She would make the nurses wait until I arrived each day to bathe and dress her. Velveeda’s room was the first place I would go when I arrived each morning. Most of the time, she was awake waiting on me, and would give me a big smile when she saw me. If we were in the playroom with the other children, she would try to push her way to the front of the group and climb on my lap. She had a trach but would cover it and talk to me in spite of it.

Mama helped me to sew a special dress for Velveeda…it was white with little red hearts on it. Velveeda loved it, and would insist on wearing it almost every day. Unfortunately, with the trach, it meant I would have to wash it by hand almost every day too, so some mornings it wasn’t yet dry. One summer morning, I arrived at my usual early time and went to Velveeda’s room. It was dark and empty. At the nurses station, I found somber faces and the nurses in tears…Veleveeda had died during the night.

I didn’t know then that, years later, I would go to nursing school and become a Registered Nurse. Over the years, I’ve cared for so many patients…young and old alike; but I still remember that sweet little face with the huge dark eyes and the great big smile.

The photo is a 46 year old newspaper clipping from the old Memphis Press Scimitar! Kathy’s mother had clipped it out and saved it for me.