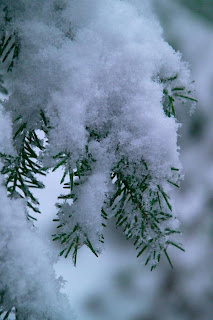 The days on the calendar flew quickly by. Thanksgiving had come and gone, and I was looking forward to a nice long break at Christmas. I was tired and “run down”, to use one of Mama’s expressions, after a bout with strep throat and a high fever. I had even managed to spend a few days and nights as a patient at the infirmary where I worked. The Christmas break would give me a chance to rest and catch up on all the school work I’d fallen behind on…not to mention preparing for the finals the week after my return to school. Not the best way to spend Christmas vacation, but I was thankful for the time.

It snowed the day before we were to leave for Christmas break. A deep blanket of white covered the campus. Icicles hung from the chapel and other buildings and weighed heavily on the tree branches. Everything glistened in the bright sunlight. It was a winter wonderland in the deep South. No one had come prepared with boots but we still tromped in the snow, throwing snowballs at one another and basically acting thirteen again. It added to the excitement of going home.

I was riding home with Sandra, one of my friends from Memphis, who was also a freshman there. Her boyfriend Mike had come down to drive us back to Memphis. It seems there was someone else with us on the trip…but I can’t quite remember who it was. I gently remind myself that it has been forty-five years.

It continued to snow all that day, and the roads had turned into a solid sheet of ice. Driving was reported to be treacherous at best. Under normal circumstances, the trip took four hours. We left school about eleven o’clock in the morning right after our last class. It didn’t take long, or very many miles, to know we were not looking forward to this trip. Mike was a good driver but totally inexperienced driving in snow; and now the snow had been packed under a sheet of ice.

I remember vividly that, at first, there was talk and laughter among us on the trip…and then silence as we realized how dangerous it was. We must have only been traveling about 20 miles per hour, but more than once, we slipped and slid totally across the road and into what would have been oncoming traffic…had anyone else been there. We passed dozens of vehicles abandoned on the side of the road or, even worse, wrecked. There were very few stores open and we needed to stop for gas. We also needed to get some food and something warm to drink. Unfortunately, this was before cell phones so we had no way to call our parents or anyone if, indeed, we were to need help.

We finally found a store open and bought some sandwiches and hot chocolate. We also filled the tank with gas. I remember calling my dad collect at that point. He said to find some where to buy chains for the car and that he would pay for them along with the gas. Luckily, we did find a store open and managed to get chains to fit. A little while longer and we were back on the road. The chains did help some, but it was still rough going. Twelve hours after leaving school, we pulled up to my front door. We were all exhausted but glad to be home.

Since that long ago journey, I’ve lived in Illinois and Iowa where it snows a lot. I’ve driven in snow storms and blizzards with white-out conditions. I’ve driven on sheets of ice. Yet, each time I do, I’m transported back in time to a car full of college kids trying their best to get home for Christmas…