You are here: Home / Family / Mama learns to drive… 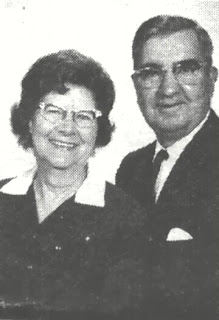 Mama was a wonderful homemaker, Southern cook and an artist with a brush, needle and thread. Although, she could read music by “shaped notes”, she sang and played the piano and organ “by ear”. She had a wonderful sense of humor and a quick and ready smile. For the most part, I think she was content to stay at home for she considered taking care of her family the most important role in her life.

Daddy was mellow and easy going. As the father of four daughters, I suppose he had to be. He was quiet but also had a good sense of humor. Sharon and I could easily get him to laugh. He had always been protective of Mama as well as his daughters; and perhaps that was the reason she had never learned to drive. She had never considered the fact she couldn’t drive a problem, until Daddy began riding to work with a fellow employee…leaving the car at home.

Having a perfectly good automobile left sitting in the driveway and plenty of places she wanted to go was a different story…a motivating factor I would say. There were the fabric stores she loved, grocery shopping and a local shopping center with nice department stores. I was in college and not there during the day to drive for her, so Mama decided she would learn to drive. When Mama made up her mind to do something, there was no stopping her. The police academy offered driving lessons for adults and she enrolled. Mama didn’t do anything halfway and became their star pupil.

She loved her newfound freedom in our 1957 Chevrolet, and now insisted on doing the driving herself…even when I was with her! I understood the feeling of those new wings and it would have been fine with me…if only she had driven faster than 25 miles per hour. With her genteel Southern upbringing, she could not understand why people were passing her or giving her unkind looks when she pulled out in front of them at a snail’s pace. I believe, eventually, she did pick up her speed and gained her confidence behind the wheel.

I am my Mother’s daughter in a lot of ways (no, not the driving – I drive much too fast). When it comes to a paintbrush, needle or thread, I find joy. It’s almost as if I don’t have a choice…I simply must be in the midst of creating something. As of yet, my quilting projects have been small ones, but I enjoy the process. I love to sew and made many of my daughter’s clothes…and even a few for my sons…when they were growing up. I love to cook, especially Southern style. Most importantly, I have found my greatest joy in my role as a mother…and now as a grandmother.

Looking back after all these years, I think that it took great courage for Mama to conquer her fear and learn to drive at the age of sixty. I hope if I were faced with a similar challenge, that I might just have a little of her courage…

(Just for fun, check out the You-Tube black & white TV commercial on the 1957 Chevrolet link above!)