You are here: Home / My Southern Heart / Our birthday… 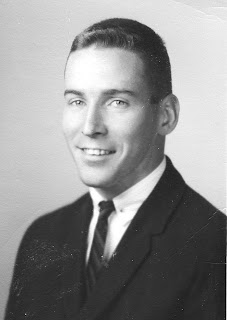 Today is the first day of December…our birthday, Bill’s and mine…and, perhaps, the best time to begin telling our story.

The first time I ever saw his face was on an Autumn afternoon in 1964. I was sitting on the sofa by the fireplace in the BSU with some friends, when he walked in the door. He was wearing his Air Force ROTC dress uniform. He removed his officer’s cap and placed it on the top shelf of the coat rack. I couldn’t help watching him as he walked over to another group of friends and immediately became the center of attention…talking and laughing. I remember thinking he was handsome, very sharp and self-assured, almost cocky…much like a young Tom Cruise in Top Gun. He had beautiful green eyes and dark brown hair clipped short in the ROTC required style. There was something about him that I definitely found appealing.

His name was Bill. I had no way of knowing at that moment that I would spend thirty-nine years of my life with him. Life is a remarkable gift, but unfolds just one brief moment at the time; and at that time, I was dating Mike (the young Sean Connery look-alike), and Bill was dating a redhead named Linda, who was at least as tall as he was or maybe a little taller. Linda was a home economics major as I recall and it would, in the months to come, be a comment made by Linda that made me realize my true feelings for Bill…but that’s later in our story.

The exact moment that Bill and I met is lost in my memory, but over the Autumn of 1964 we became friends. At some point during that season, Bill asked me to go to a church banquet with him which was held at a beautiful campgrounds. Memory is a funny thing…laid down in so many transparent layers…but it almost seems I can remember the drive out there in his little black VW bug. There’s a canopy of brilliant colors flashing past as we drive along those winding roads…laughing and talking all the way. Many years have passed, but I remember the beautiful gardenia corsage he gave me. Gardenias would be one of his favorites for years to come.

As the months and seasons came and went, our friendship continued to grow. We would find an empty picnic table on the grounds of the BSU when the weather was good and enjoy our lunch together. He would share his Mom’s homemade oatmeal raisin cookies with me, which I loved. After lunch, we’d go for long walks in the neighborhood surrounding the MSU campus. Looking back now, I realize we were wanting to get away from the crowd at the BSU…we wanted time to talk and get to know one another.

Little did I know that while I was growing up on Victor Drive, Bill lived just a few short blocks from me all that time. We went to different schools and different churches, so we had never met until that day in the BSU.

For years to come, I would tell Bill that I had been his birthday gift when he was only two years old…