As I remember Daddy’s birthday today, I thought it might be a good time to share a few pages or memories from the family history book which my sister Dot and I were working on before we lost her to leukemia. I want to finish this book. I really do…because that’s exactly what she would have wanted. If you’ve been reading this blog all along, then you know my Dad’s whole world was my Mama and my sisters and me, and later the grandchildren too. He loved his family. He was a gentle, kind, loving person. In my entire growing-up years, I never saw him lose his temper or raise his voice. I never heard a curse word. Amazing, isn’t it. I’m thankful that my parents were my parents. Happy Birthday, Daddy. I miss you.

an excerpt from the family history…
Daddy’s heritage lies deep within the gently rolling hill country of Mississippi, a fertile land with tall, green pines and abundant hardwoods. As we began the search for our family history, my sisters and I, once again, traveled down those winding country roads. We were struck with the quiet beauty of it all.

We found the little Piney Grove Baptist Church where our ancestors had worshiped, nestled in a sun-dappled clearing beneath the tall pines, and it would have been easy to believe we were standing in Cades Cove in the Great Smokey Mountains. Miles of farmland or forest stretched between homes as the wind whistled through the multitude of trees. It seemed time had stood still.

Although the site of the “old homestead” stands empty now, it was easy to imagine what life must have been like back then. Home for the Willis Nelson McGregor family was a large “dog-trot” style house which was built in the tradition of their Scottish ancestors who had migrated to Pontotoc from North Carolina and Tennessee. Situated on fertile farmland in the Springville community, their home was located just down the road from other members of the close knit McGregor family.

The youngest of seven children, Homer Stanley McGregor was born February 17, 1905 in Pontotoc County, Mississippi, to Willis Nelson McGregor and his wife Martha Sarah “Mattie” (Carpenter) McGregor. His brothers and sisters included Robert, Pearl, Quella, Lester, Daisy and Mazie. With two older brothers and four older sisters, Homer McGregor grew up in a home filled with the voices of family, laughter and music. With family roots deeply established, the McGregor children enjoyed the benefits of growing up in a community surrounded by a large number of McGregor and Carpenter (maternal) family members – including grandparents, aunts, uncles and cousins.

Highly respected for their strong family values and religious strengths, the McGregor family was well established early in Pontotoc’s history. Descendants of a Baptist preacher from Scotland, the generations that followed produced many other Baptist preachers and church leaders. Most of them were farmers and they all loved the land. There were often hardships that came with depending on the soil for their livelihood but they loved the challenges and rewards that came with each season.

My sister Dot penned these beautifully written memories of those growing-up years in Mississippi.

I will always remember Mama and Daddy as very hard-working and law-abiding people. Their family was the most important thing to them; and, in fact, the family was their whole life as they grew older.

Daddy had to work very hard as he had to support his family during some of the depression days, and things didn’t get much better for a long time after the depression; however, I remember that we had as much as most all of my friends and neighbors had back then. Daddy did his best to provide for our needs. Daddy had a lot of pride buying that little farm (in Rena Lara), and he graduated from plowing mules to a tractor which was much faster and easier. Daddy was so proud of that John Deere tractor. (I can just see him out in the fields now). Gerry and I, (Eunice wasn’t old enough) had to pick and chop cotton, but Daddy didn’t ask us to work as hard as some of the kids did, and Mama did not have to help in the fields like some of the wives did either. She took care of the house work, canning and sewing.

Mama always would have a huge and delicious dinner (not lunch) cooked for us at noon when we came home from the fields. The table would be full of several fresh vegetables, a meat (or maybe two), and always a dessert or cobbler, pie or cake, and everything was made from scratch. (She didn’t know what a cake mix was back then nor did she know what a “store bought” pie crust was. (It makes my mouth water to think about all the good food!) I can still visualize that table – actually, we had two; one long one in the kitchen and one on the screened-in back porch, where we ate often in the Summertime. And we had a long bench on one side of the table where we children sat.

Some of my best memories too, especially of Mama, would be the great tea cakes she would have baked for us when we got home from school – sometimes they were plain tea cakes and sometimes they would have chocolate icing (made from scratch) between them, and in the Fall and Winter months we always had baked sweet potatoes waiting for us in the oven. We had a wood stove, so the oven would stay warm for hours, thus the potatoes were too. (This was a snack for us – can you imagine children eating that now for a snack!)

Mama, as we all know, was a great seamstress. She made just about all of our clothes, except for the things that we ordered out of the Sears Roebuck Catalog. I will always remember that every Fall I usually would order a navy and a red cardigan sweater, and Mama would make me some skirts (always a plaid); and she also made us pretty dresses. (She was a perfectionist so they always looked great). We also ordered our shoes, and a coat occasionally, from the catalog. (Dear Old Sears – it’s too bad they don’t still have catalog mail ordering) but I still have my memories. Yes, Mama was proud of her daughters and she wanted us to look nice, so she did the best with the financial means she had.

We didn’t have much entertainment back in the 1930’s and 40’s, except for radio (and for a long time that was battery operated). But, I can still see Mama and Daddy listening to “Amos & Andy” while we ate supper every night which was (as I still remember) 6:30; and on Saturday nights we listened too the Grand Old Opry. On Sunday or Monday nights we listened to Lux Theatre. (Oh, if only the children now could use their imagination as we had to). Our other entertainment was “going to town” (Clarksdale) on Saturdays, especially in the Fall, after having picked cotton all week. Daddy would give each of us maybe a couple of dollars or less – which would probably equal to ten now – and we would go to the movie and also get a bag of popcorn, and usually after the movie, we would go to the ice cream parlor which really was a treat, as we only got ice cream when we made it in a hand-cranked freezer. (You see, for several years there we did not have electricity and had to keep our food cold in an ice box!) The ice man brought us say 100 pounds of ice that kept it cool, and we chipped off that for ice tea. (I can’t remember if the ice man came one or twice a week, but occasionally he didn’t make it and we were very disappointed). I remember that always around the 4th of July, for Mama’s birthday, we got extra ice to make lots of ice cream and our neighbors (the Hokes) would make some too. Oh, it took so little to make us happy then. Another exciting form of entertainment that we had were the traveling “tent shows” that came annually to Rena Lara and people within miles went to see that. Daddy always looked forward to going to those shows and taking Mama and us.

Daddy and Mama decided after living on the farm for several years to move to Clarksdale and then to Memphis where Daddy worked for General Electric until he retired. Then, I guess he wanted to move where the pace of life was slow, which would be the country or small rural area, so decided to make his final move to Grenada, Mississippi.

Mama and Daddy were kind people, and Daddy always had patience. Most of the time Mama had patience too, but sometimes her Irish got the best of her. I loved them both dearly and miss them so much! They were great people!” 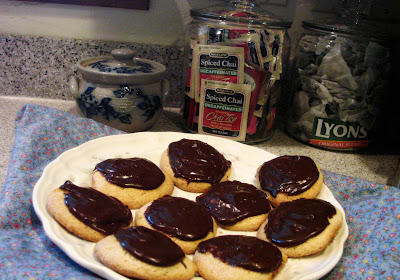 Note: If you’d like to try my Mama’s wonderful teacakes, you’ll find the recipe here. Enjoy!
Previous Post: « Sweet child of mine…
Next Post: All those questions… »