When I was younger, and the family members with most of the answers were still living, I was too busy to care. I was a young wife with three children to raise, a home to take care of and a nursing career. It never occurred to me to search for “ancestors” or even to ask about them. What a shame – the answers were there.

For the past few weeks, I’ve searched for information about William Merle Jordan – or “Mike” as he was affectionately known. He was my oldest sister’s first love…in all honesty, the love of her life. They met in Clarksdale, Mississippi, in the mid-forties. I wish I had asked my sister just how they’d met. I’ve seen pictures of Mike…a handsome young man with striking blue eyes. I see those blue eyes now in his daughter, Sharon. I see a remarkable resemblance to him in Sharon’s son, Michael. My sister did tell me the story about the days not long after they’d met, when Mike worked as a “milk man” in Clarksdale. Quite often, on an early morning, he would leave two quarts of chocolate milk in the old-fashioned glass bottles on the door step of our home as a gift for my sister and the family, a sweet simple gesture and a luxury at that time. 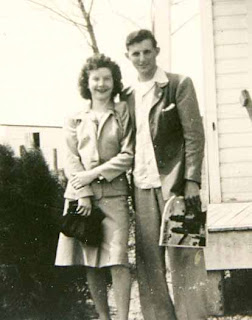 Dot and Mike were married on March 1, 1947. They were young and in love…they were happy. They lived for a time in Clarksdale and then we all moved to Memphis. My parents purchased half a large two-story duplex on Chelsea Avenue. Uncle Lester and Aunt Ethel purchased the other half. Dot and Mike had the attic apartment, which my sister Gerry says Dot decorated like Country Living and that it was so cute. 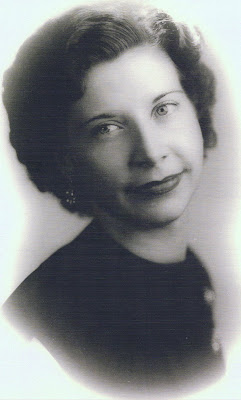 My sister, Dorothy. She was probably in her late twenties or early thirties here.
My niece, Sharon, was born on September 16, 1948. I was two and a half years old at the time. I must have thought they’d given me a real live baby doll. She had a beautiful olive complexion and big blue eyes just like both of her parents. She also had a shock of thick, dark hair. I love the photos of her with that dark hair sticking straight up! She was a beautiful baby and is still beautiful. 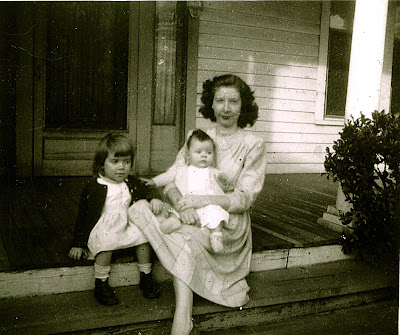 My sister, Dot, holding Sharon and me sitting beside them. Notice my arm on Dot’s knee and Sharon’s little hand on my shoulder. You also couldn’t miss my brown high tops! This photo was taken on the steps of the large duplex on Chelsea.

These were the years following WWII. Times were hard and jobs were scarce. Mike traveled to Texas with his brother Charles to find work. He had lined up a good job as a truck driver which was to have started the first day of February 1949. In the meantime, he was working on a shrimp boat. On Monday morning, January 24, 1949, there was an explosion aboard the Wilda L, a 54-foot shrimping boat, eight miles off the shore of Freeport, Texas. Both the owner of the boat and William Merle “Mike” Jordan were lost to the sea. A search of the waters and through the debris in the hull of the boat failed to locate their bodies.

My sister and Mike’s mother traveled to Freeport, Texas, most likely by train, right after they received word of the explosion. Years later, my sister remembered those dark days, staring out into the deep waters of the Gulf, watching as the Coast Guard searched in vain. She was twenty-one years old at the time with a four-month-old baby girl. Mike was twenty-three.

On the telephone the other day, Sharon and I both cried as she read to me from the last letters that Mike wrote home to her mother from Texas. He had high hopes and dreams of a better life for them. He loved his baby girl and talked of dreaming about her for several nights in a row. He told my sister to “tell Dianne to be a good baby”. I had never thought before about having known Mike, but I did. I had been his baby sister too.

Sharon says that, over the years, it was just too sad, too difficult, for my sister to talk about Mike very much. After a while, she just quit asking. Now, there are so many questions wanting answers. When Dot and I were working on the McGregor and Haney family histories, she was also working on Mike’s family history. Through the archives of Ancestry.Com, I have found some information. Mike’s younger sister, now eighty, was able to fill in some of the blanks, but, still, there are so many more unanswered questions.

We’re not giving up. On my next visit South, we’ll travel to Clarksdale and to the Mississippi State Archives in Jackson, Mississippi. Hopefully, before then, we’ll find some of Mike’s father’s family members. Right now, it’s still a mystery, but the answers are out there. Hopefully, someone will also have photos of Mike’s father.

Sharon does have one small, piece of paper with her Dad’s actual signature on it. Amazingly, it bears a striking resemblance to Sharon’s…

Note: My sister did not remarry until Sharon was in high school, when she married Tom Kemp. He was a wonderful man who loved Dot and her family like his own.